World Password Day has existed since 2013 and has taken place on the first Thursday in May ever since. A strong password is important for denying unauthorised third parties access to online services. G DATA provides useful information for high account and password security.

Propaganda on a personal social media account: If the Turkish flag and a picture of Turkish President Recep Tayyip Erdoğan appeared on your personal Twitter wall, some people would no doubt become suspicious. Yet this is exactly what happened to the editor-in-chief of Der Spiegel, Klaus Brinkbäumer, on 14 January 2018. He is supposed to have posted on his Twitter account the sentence: “We would like to apologise for the bad news we have been reporting and publishing lately about Turkey and Recep Tayyip Erdoğan.” As it later transpired, the account had been taken over by third parties without permission. One of the reasons for this could have been an insufficiently secure password.

Text passwords such as those used in social media or shopping sites are and will continue to be an important component when it comes to securing personal online accounts from unauthorised third parties. For years, IT security experts have been working on the question of what a robust password needs to consist of to prevent an account from being taken over. Formerly, analysts and researchers agreed that a password should consist of at least eight characters and should not contain common and easy-to-guess words. This is still the case even today in the current password guidelines of corporate giants such as Google. The United States Computer Emergency Readiness Team (US-CERT) adds that users should use differently generated passwords for their accounts. The passwords must meet a range of complexity requirements, such as special characters and numbers as well as letters. The study “Let’s go in for a closer look: Observing passwords in their natural habitat” shows that people have passwords for an average of 26.3 different websites. In 80% of cases, they always use the same or minimally adapted passwords for these. This means that users are somewhat reluctant to use different passwords for different websites, because who can remember numerous passwords that are both complex enough and unique to the respective portal? The solution is a password manager such as the one in G DATA Total Security.

Assigned passwords are stored in an offline database on the computer with the help of plug-ins for the web browser. Only a master password to open the password safe is needed to ensure that they are protected against access by third parties. All the personally generated passwords can then be viewed and managed here. If users require a secure password, a cryptic password can be generated in the software with one click. However, it is better if Internet users think of separate passwords. G DATA provides useful tips on World Password Day: 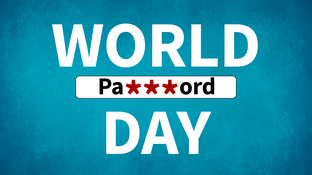