With its new gamification approach, the Bochum-based AV software provider will be making its users more aware of IT security in future

G DATA is implementing a new feature in the upcoming Security Generation 2019 version of its security solutions for home users. The feature, a playful reward system, will significantly encourage security interaction. By way of virtual “achievements”, the German IT security provider aims to motivate users to regularly carry out IT security measures, such as virus scans or backup generation. Attractive prizes await particularly active users, such as mugs, T-shirts, notebooks and stickers.

IT security is not an easily-accessible subject area. Nevertheless, the fact is that every computer or smartphone user will have to deal with this subject sooner or later. Users are then confronted with backing up important data, regularly updating software or carrying out a comprehensive virus scan. However, these are tedious and boring everyday tasks that take up time, never mind getting on people’s nerves. Hence G DATA is taking a new approach in the upcoming Security Generation 2019, guiding users to an even better-protected end device in a playful and entertaining way. “We are convinced - gaming elements will motivate in a playful way,” says Kai Figge, co-founder and board member of G DATA Software AG from Bochum. “Every individual user starts from a completely separate level of knowledge. Our task is to meet our customers there and set small goals within very short periods of time using a playful approach. In our view, IT security subjects will be understood more quickly in this way.” Progress bars will make it clear at a glance how frequently the protective modules of the installed G DATA security solution are being used and how adept users are at handling the software.

A window for the virtual trophies and medals will appear in the upper section of the user interface. A person who regularly carries out regular data backups will become a “Backup Boss”, and someone who scans their computer frequently will get the title “Scan Superman”. Other titles that can be won are “Quarantine Queen” and “Password Prince”. The creative department at G DATA is also in the process of drafting the appropriate graphics - because anyone who makes an effort with backing up their device should be rewarded with visually appropriate images.

Every individual user starts from a completely separate level of knowledge. Our task is to meet our customers there and set small goals within very short periods of time using a playful approach. In our view, IT security subjects will be understood more quickly in this way.

The idea of dealing with a subject in a playful way, gaining points and ultimately receiving a reward is not new, but is still effective. Major groups of companies in the world of computer games already make use of it. Gamers can win “achievements”, are also given a title and so can boast to other gamers that they have achieved a certain level of success. “I am of the opinion that our system should not provoke competitiveness among users, but should be rewards-based. For this reason, we are sending out mugs, T-shirts, stickers and notebooks to all G DATA customers who regularly pay attention to the IT security of their device,” says Figge, justifying his decision. A progress bar then indicates which reward can be claimed for free from the G DATA headquarters in Bochum. Depending on the achievement, a corresponding item is released for the customer. “We hope to be able to simplify the multifaceted and abstract subject of IT security with this approach, and help users refine their own view of security,” concludes Figge.

No gamification approach is planned for the new Security Generation 2019, as this press release was an April Fool's joke. The idea of approaching a topic in a playful way, nevertheless, would certainly be a welcome approach in the area of IT security as well. 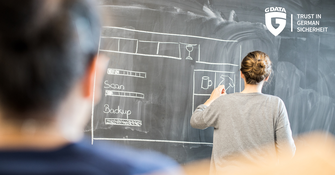